Can you imagine logging into Facebook and having to sift through thousands of posts to find something you’re actually interested in? Luckily, Facebook uses a complex algorithm to automatically decide which posts are shown first so that you don’t have to do that. At the beginning of this year, 2018, Facebook announced that it was performing a major upgrade to the standard Facebook Algorithm. The goal? To bring friends and family together more often and create a more active community.

You might be wondering, how does Facebook make those decisions, what can we do about it, and why should I care? In this article we’ll answer those questions and explain what this means to you as a store owner and why it’s actually a good thing.

Well first of all, Facebook uses indicators about each post, called “signals” to decide which posts are shown and to whom they’re shown. The signals they’re looking for are common interactions on Facebook: reactions, comments, shares & replies. Simply put, the more people interact with a post, the more it’s visible to other users, then more people interact with it… I think you can see where this is going.

With the algorithm changes, they are also now prioritizing posts that spark conversations and true interactions between people. The types of posts most likely to lead to conversations are friend’s seeking advice, another friend asking for recommendations for a vacation destination or even a news article or video that has had a lot of discussion around it. In addition, they’re also prioritizing content that comes from friends and family over public content.

What do these changes mean for my business?

A shift in focus like this means that, yes, less public content will appear in user’s feeds than it did previously. This can be a bit of shock if your business has relied on Facebook ads and marketing for traffic and exposure. The bottom line is that you’re likely to see less results from traditional Facebook marketing efforts. While this is concerning for many people who operate Facebook Pages, there are still ways to see positive results from your Facebook marketing.

What steps should I take now?

The best way to continue seeing results from your Facebook marketing efforts is to focus on meaningful, relevant content that sparks discussions and interest. When deciding what content to promote, we recommend the following order of priority:

Why should I care about Facebook’s algorithm?

It’s simple: Facebook has 2.2 billion active users as of first quarter 2018. The chances of your potential customers not being on the platform are very, very low. With that large of an audience, you can easily utilize all of the targeting tools they provide and see a return on investment with sales, brand recognition and customer service.

The changes made to the News Feed algorithm can be a bit hard to swallow, however, in the end it’s for the best for all parties. Only your truly engaging posts will get traction, but that kind of engagement is better for your success than getting a couple more views would have been. Users will see more of what’s relevant to them, meaning if they do see your post, they are actually more likely to interact with it. Finally, Facebook can continue improving their platform and move closer to it’s goals of bringing people closer together.

Reach out to us! We want to know, have you’ve seen any difference in your Facebook marketing efforts? What do you think of the changes they’ve made?

We’re also offering Free Facebook Reviews for those who want to improve their Facebook Page and aren’t quite sure where to start. Just send us your Facebook page and we’ll take a look! We’ve got your back! 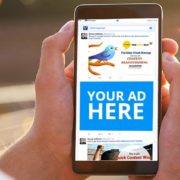